What to Read Next? New Mysteries!!

Home/Adults/What to Read Next? New Mysteries!!
Previous Next

What to Read Next? New Mysteries!!

We have added new mysteries to the Curtis collection.  Click on the title to check availability and request.

NASA is about to launch Apollo 18. While the mission has been billed as a scientific one, flight controller Kazimieras “Kaz” Zemeckis knows there is a darker objective. Intelligence has discovered a secret Soviet space station spying on America, and Apollo 18 may be the only chance to stop it. But even as Kaz races to keep the NASA crew one step ahead of their Russian rivals, a deadly accident reveals that not everyone involved is quite who they were thought to be.

While on vacation off the Spanish coast, a Dublin pathologist catches a glimpse of a young woman he believes was murdered years ago and summons Detective St. John Strafford to investigate before someone can finish the job.

While Joe Gunther looks into the mafia-related murders linked to the death of a local philanthropist and millionaire, PI Sally Kravitz teams up with a reporter to expose the truth behind this tangled and expanding web duplicity, greed and obsession.

Elena Standish investigates the mysterious death of Lila Worth, who she discovers is a British spy, at an anniversary party for her parents in Washington, D.C.

Christmas has come early to the town of Paterson, New Jersey, in the form of a snowstorm that dumps two feet of snow on the ground. When Andy Carpenter’s golden retriever, Tara, goes to play in the snow and instead discovers a body, Andy ends up on the phone with the local newspaper editor. The murder victim is Mayor Alex Oliva, who had an infamous relationship with the newspaper.

Family lawyer Sandy Moss knows it’s a mistake to get mixed up again with charismatic Hollywood TV star Patrick McNabb – prime suspect in her first (and last) murder case – but when he asks for her help she finds herself saying yes. Soon she’s tangled up in a celebrity slaying … and Patrick seems to believe he’s essential to solving the whole thing.

In this searing crime prequel, two crime-writing legends team up for the first ever case of D.I. Laidlaw, Glasgow’s original gritty detective who is standing in the midst of gangs, organized crime bosses, crooked politicians, corrupt police and innocent battlers caught in the crossfire.

After a music festival comes to the quiet town of Mayville Heights, librarian Kathleen Paulson and her inquisitive cats find themselves in a jam when a musician turns up dead. The more Kathleen thinks about it, the more this murder feels like it could be an encore performance.

In the wake of her nervous breakdown, Sara Keane’s husband moves them to his native Northern Ireland for a fresh start where she soon discovers that their house has a terrible history her abusive husband never intended for her to discover.

In this stylish exploration of the power of memory, perception and of one person over another, Elspeth Bell attends the 50th birthday party of her ex-husband Richard, a Hollywood director, that soon turns into a real-life murder mystery, where every guest is a suspect.

After attending an exhibit on the facial reconstruction of ancient skulls, Bruno wonders if this technology might provide an invaluable clue to a 30-year-old cold case. But learning the identity of the murder victim is only the beginning.

When an old friend, who has been accused of stealing millions of dollars’ worth of diamonds, desperately needs her help leaving a dead body in his wake, Elizabeth and her friends go up against a ruthless murderer who wouldn’t bat an eyelid at knocking off four septuagenarians. 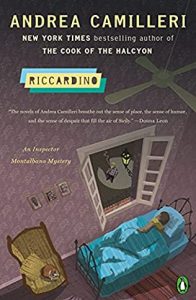 The long-running and much-loved Salvo Montalbano series, set in Vigàta, Sicily, concludes with an astonishing, meta-infused narrative that integrates the series’ creator, Camilleri himself, into the story as a character called the Author.

Tony Richards hires Veronica Blackstone to write love letters for him, despite seemingly not needing her help. After he’s found dead, the police reveal his name was Ted Roberts and believe he was killed during a robbery gone wrong. Veronica isn’t convinced.

Lila Nash is on the verge of landing her dream job–working as a prosecutor under the Hennepin County Attorney–and has settled into a happy life with her boyfriend, Joe Talbert. But when a woman is pulled from the Mississippi River, barely alive, things in the office take a personal turn.

If you need more recommendations, please call us at l725-5242 or email helpdesk@curtislibrary.com.  We are happy to help!