Home/Adults/READ ME Book Discussions
Previous Next

Every summer, Read ME encourages Maine adults to read two books recommended by a well-known Maine author.  This summer, recommending author Christina Baker Kline has chosen: Sigh, Gone: A Misfit’s Memoir of Great Books, Punk Rock and the Fight to Fit in by Phuc Tran and Beneficence by Meredith Hall. 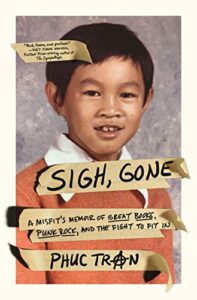 Curtis will host a book discussion on Sigh, Gone on Wednesday July 13 at 1pm.    Registration is required.

In 1975, during the fall of Saigon, Phuc Tran and his family immigrated to America, landing in small town Pennsylvania.

This is a coming-of-age memoir told through the themes of great books such as The Metamorphosis, The Scarlett Letter, The Iliad and more, against the hair spray-and-synthesizer backgdrop of the ‘80s.  Tran navigates immigration, isolation, teenage rebellion, assimilation, and the expectations of his parents – and finds solace and kinship in classic literature and punk rock.

“The United States was already a better country because Phuc Tran refused to change his name. Then he went even further in changing this country by giving us this bold, funny, and profane memoir: a portrait of a young punk refugee and of heartland America itself, each of them as defiant and compelling as the other.”

— Viet Thanh Nguyen, author of Pulitzer-Prize winning The Sympathizer and The Refugees

“In Sigh, Gone, Phuc Tran offers a searing, trenchant, and hilarious chronicle of adolescence. His memoir seethes with all the shame and rage, loneliness and longing borne from cultural dislocation; thrums with all the fears and half-truths, anti-triumphs, and confused desires of that vicious and necessary American journey we call ‘assimilation’. With this book, Tran not only puts himself on the literary map: he rips the map to pieces and tapes it back together as he—forever the bookish young punk—sees fit. The result: a refugee story of the most modern kind, told entirely on the author’s own terms.”

Book discussion on Beneficence will be Tuesday, August 23 at 1pm.  Registration is required.

Set on a dairy farm in Alstead, Maine, in the middle decades of the 20th century, New York Times bestselling author Meredith Hall’s radiant debut novel is a study of love—both its gifts and its obligations—that will stay with readers long after the last page.

When an unimaginable tragedy turns the family of five into a family of four, everything the Senters held faith in is shattered. The family is consumed by a dark shadow of grief and guilt. Slowly, the surviving Senters must find their way to forgiveness—of themselves and of each other.

“A powerful story of love and loss and endurance… [A] simple, profound tale… Remind[s] all readers that love, memories and stories, and indeed language itself, can have transcendent, radiant, beneficent power—even over death.”
—New York Journal of Books

“This is a special book, nearly perfect. It is a story that lingers, and one that will remain with me for the remainder of my time in this world.”