Are you one of 174 people on hold for Horse by Geraldine Brooks? Or waiting for Midcoast by Adam White (130 holds)?   If so, check the Bestseller Express shelves — it just might be your lucky day.  We have those novels as well as lots of other popular titles.  The Bestseller Express  is a collection of popular books, sponsored by the Curtis Friends, and available only to Curtis patrons. They cannot be reserved or renewed — check out period is 7-days.

A body found in the trunk of a stolen car leads Joe Gunther and his team to crucial evidence in an infamous unsolved case from years past, leading the team to be pulled from the New Hampshire coast to near the Canadian border as they attempt to find and capture the psychopath responsible for a tangled, historical web of misery, betrayal, and loss.

Has Anyone Seen My Toes? by Christopher Buckley

An aging screenwriter in coastal South Carolina deals with stress from the pandemic by binge-eating and believing there’s a nefarious Russian influence on the local coroner’s race in the new novel from the best-selling author of Thank You for Smoking.

Starring Agatha Christie’s legendary detective Jane Marple, this brand-new collection of short stories is written by 12 best-selling and acclaimed authors–each of which reimagines Marple through their own unique perspective while staying true to the hallmarks of a traditional mystery.

Investigating the high-profile case of police chief Lucia Gomez, who is accused of soliciting sex for promotions to higher ranks, P.I. Clarice “Pinky” Granum must unravel the dark secrets of the people closest to Gomez, drawing her into the deepest recesses of the city’s criminal networks.

Cassie Dewell has her hands full with two cases — finding the man who conned a wealthy Florida widow out of her fortune, which takes her to Montana, and decoding a poem that promises buried treasure to one lucky adventurer, which has led to five deaths.

As simmering tensions between the towns of Beartown and Hed turn into acts of intimidation and then violence, a 14-year-old boy, increasingly alienated from this hockey-obsessed community, puts in motion a plan to avenge his beloved sister’s death that will leave Beartown with an unimaginable loss.

What is more important? Friendship, loyalty, or love? Picking up where Maybe Someday left off, readers are returned to the musical world of Ridge Lawson and Sydney Blake. And Maggie. And Warren and Bridgette.

Shrines of Gaiety by Kate Atkinson

In London after the Great War, Nellie Carter, the notorious–and ruthless–queen of a dazzling, seductive and corrupt new world in the clubs of Soho, finds her success breeding enemies as she faces threats from without and within, revealing the dark underbelly beneath Soho’s gaiety.

Faced with their toughest case yet, made only more difficult with COVID-19 restrictions and the challenges of their own personal lives, Department Q, led by Detective Carl Morck, investigates a series of “accidental” deaths over the span of 30 years that may be the work of a violent serial killer.

Back to the Garden  by Laurie R. King

Inspector Raquel Laing investigates a fifty-year-old case at a storied and glamourous California estate after renovations turn up a human skull that may have been the work of a serial killer. 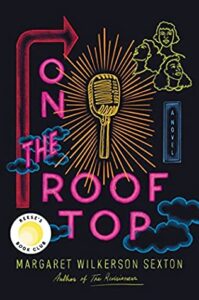 On the Rooftop by Margaret Wilkerson Sexton

The talk of the Jazz-era Fillmore, The Salvations–sisters Ruth, Esther and Chloe–find their personal ambitions on a collision course with those of their mother, whose dreams of musical stardom for them forces her to confront the parts of her life that threaten to splinter.

When a member of a group of friends, who meet regularly for reunions on Holy Island, is found hanged, Vera Stanhope must discover what the friends are hiding and whether the events of many years before could have led to murder then, and now.

When a star high-school baseball player is found dead after winning the team’s biggest game, police chief Jesse Stone, who had personal ties to the victim, is stonewalled at every turn, while another case needs his attention after the former Paradise police chief is murdered.

Escaping his manipulative and domineering brother, Frank, Cal, forging his own way and acquiring his own wealth, finds his brother’s power and influence interfering with his affairs, and when Frank commits the ultimate betrayal, Cal is left with only one, final solution: murder.

Hell and Back by Craig Johnson, Walt Longmire mystery #18

Walt Longmire wakes up at the site of a tragic 1896 boarding school fire covered in blood and missing a bullet from his gun, in the 18th novel of the best-selling series following Daughter of the Morning Star.

After years of avoiding each other, Daisy Darker’s entire family is assembling for Nana’s 80th birthday party in Nana’s crumbling gothic house on a tiny tidal island. Finally back together one last time, when the tide comes in, they will be cut off from the rest of the world for eight hours. The family arrives, each of them harboring secrets. Then at the stroke of midnight, as a storm rages, Nana is found dead. And an hour later, the next family member follows… Trapped on an island where someone is killing them one by one, the Darkers must reckon with their present mystery as well as their past secrets, before the tide comes in and all is revealed.

The Lost Ticket by Freya Sampson

Arriving in London, brokenhearted Libby Nichols meets elderly Frank who has been riding the bus for 60 years, hoping to find a girl he met in 1962, and decides to help him search, finding her tightly controlled world expanding as she opens her heart to new friendships and romance.

If you need more reading recommendations, call us at 725-5242 or email helpdesk@curtislibrary.com.  We are always happy to help you find your next great read!