Check Out Science Fiction Classics and Other New Books

Check Out Science Fiction Classics and Other New Books

Science fiction has always confronted the concerns of society, and its greatest writers have long been inspired by the weighty issue of humanity’s ecological impact on the planet. This volume explores a range of prescient and thoughtful stories from SF’s classic period, from accounts of exhausted resources and ecocatastrophe to pertinent warnings of ecosystems thrown off balance and puzzles of adaptation and responsibility as humanity ventures into the new environments of the future. Featuring stories crucial to the evolution of eco-science fiction from Philip K. Dick, Margaret St. Clair, J. D. Beresford and more, this timely collection is a trove of essential reading.

Spaceworlds: Stories of Life in the Void ed. by Mike Ashley (Oct 2021)

Astronauts constructing a new space station must avert destruction from a missile sent by an unknown enemy; a generation starship is rocked by revelations of who their secret passengers in the hold truly are; a life or death struggle tests an operating surgeon – in orbit, with an alien patient never seen before. Since space flight was achieved, and long before, science fiction writers have been imagining a myriad of stories set in the depths of the great darkness beyond our atmosphere. From generation ships – which are in space so long that there will be generations aboard who know no planetary life – to orbiting satellites in the unforgiving reaches of the vacuum, there is a great range of these insular environments in which thrilling, innovative, and deeply emotional stories may unfold. With the Library’s matchless collection of periodicals and magazines at his fingertips, Mike Ashley presents a stellar selection of tales from the infinite void above us, including contributions from Judith Merril, Jack Vance, and John Brunner.

Born of the Sun: Adventures in Our Solar System ed. by Mike Ashley (Sept 2021)

We have always been fascinated by the promise of space and the distant lure of our fellow planets orbiting the Sun. In this new collection of classic stories, Mike Ashley takes us on a journey from the harsh extremes of Mercury to the turbulent expanses of Saturn and beyond, exploring as we go the literary history of the planets, the influence of contemporary astronomy on the imagination of writers, and the impact of their storytelling on humanity’s perception of these hitherto unreachable worlds. Featuring the talents of Larry Niven, Robert Silverberg, Clare Winger Harris, and more, this collection offers a kaleidoscope of innovative thought and timeless adventures.

Science fiction meets crime in this new anthology exploring one of the genre’s most popular themes: mystery and detection. Pitching detectives against time paradoxes, alien intruders, AI gone bad and psychic mutation are ten stories embodying the exciting range of the sub-genre, rarely given the recognition it deserves in the literary sphere. With fascinating settings such as robot society, asteroid belt space stations, and worlds similar to our own but uncannily altered, these stories are masterpieces of satisfying setups, memorable mysteries, and timeless twists.

Before the Apollo 11 mission succeeded in landing on the Moon in 1969, writers and visionaries were fascinated by how we might get there and what we might find. The Greeks and Romans speculated about the Moon almost 2000 years before H.G. Wells or Jules Verne wrote about it, but interest peaked from the late 1800s, when the prospect of lunar travel became more viable. This anthology presents 11 short stories from the most popular magazines of the golden age of SF, including The Strand Magazine, Astounding Science Fiction, and Amazing Stories, and features classic SF writers as well as lesser-known writers for dedicated fans of the genre to discover. 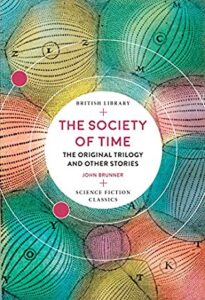 Society of Time: The Original Trilogy and Other Stories by John Brunner (Oct 2021)

Drifting through a party celebrating 400 years since the Spanish Armada’s successful invasion of Britain, Don Miguel Navarro – Licentiate of the Society of Time – is shaken by the host’s possession of a flawless mask from an ancient Aztec festival. ‘Imported’ from the past, the discovery signals a breach in the Society’s policing of time-travel and imminent danger to reality itself. Today, a relic out of time; tomorrow, the rewriting of the course of history? In three ground-breaking novellas, John Brunner weaves an ingenious tale of diverging timelines and a battle for dominance over the fourth dimension. The Society of Time stories were abridged when first collected. Here, the trilogy is reprinted in full along with two mesmerising standalone novellas: The Analysts and Father of Lies.

Other new fiction we have added to the collection:

The Many Daughters of Afong Moy by Jamie Ford (Aug 2022)

Dorothy Moy breaks her own heart for a living. As Seattle’s former poet laureate, that’s how she describes channeling her dissociative episodes and mental breakdowns into her art. But when her five-year-old daughter, Annabel, exhibits the same behavior and begins remembering things and events she has never experienced, Dorothy believes the past has truly come to haunt the present.

Jamie, keeping her demons at bay by drinking too much, sleeping with a married man and speaking to a therapist she doesn’t respect, must finally confront her father after 20 years, desperate to find out what happened that night long ago and why she was the one left behind.

Famed enigmalogist Jeremy Logan is summoned by a multibillion dollar tech company to investigate a disturbing anomaly in their new product rollout and discovers something very wrong in the sixth novel of the series following Full Wolf Moon.

Drawn to a Montana homestead and to a strange childhood companion she’d long forgotten, Joanna Chase and others converge on this remote ranch where a madman lurks with a vision to save the future through murder, forcing them all to come together to save themselves–and humanity.

The Catch by Allison Fairbrother (June 2022)

A young woman searches for the truth about her father—and the secrets of her family—in this electric debut novel.

A brand new secret agent, Emma Makepeace, is tasked with having only 12 hours to bring the son of Russian dissidents into protective custody while avoiding the assassins looking for him in one of the world’s most-surveilled cities.

A psychologist specializing in domestic abuse, Naomi, after her client’s file goes missing, wonders if her own dark past is coming back to haunt her — and if her clients aren’t the only ones in danger.

The Devil Takes You Home by Gabino Iglesias (Aug 2022)

Agreeing to one final job — hijacking a cartel’s cash shipment before it reaches Mexico, hitman Mario, to salvage what’s left of his family, travels across the border and back with two other men whose hidden motivations are laid bare alongside nightmarish encounters that defy explanation.

After America’s entry into WWII, Maria Lagana, an associate producer at Mercury Pictures, rises through a maze of conflicting politics, divided loyalties and jockeying positions until a man from her imprisoned father’s past threatens her carefully constructed facade.

Illuminating the end of the twelfth century and the notorious queen–Eleanor of Aquitaine–who dominated it, this sweeping, suspenseful tale follows Isabelle, a spirited, questing young woman, who defies convention–and her controlling, falconry-obsessed husband–to lead an extraordinary life.

The Codebreaker’s Secret: A WWII Novel by Sara Ackerman (Aug 2022)

In this dual-timeline historical novel of codebreaking, secrets, murder and romance, set in both 1943 Honolulu and 1965 Muana Kea Beach Hotel, follows two women–a cryptanalyist working to defeat the Japanese Army, and a rookie journalist investigating the disappearance of a high-profile guest during the hotel’s grand opening.

Part of The Family, a secret line of people for whom books are food, Devon, raised on a carefully curated diet of fairytales and cautionary stories, discovers that real life doesn’t always come with happy endings when her son is born with an insatiable hunger for human minds.

If you need more reading recommendations, call us at 725-5242 — we are always happy to help!