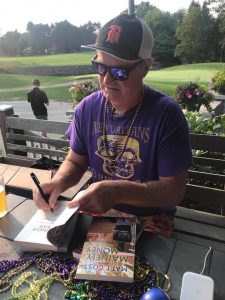 Yes, it’s true! Brunswick author Matt Cost will be here Tuesday October 12 at 7pm. Live and in person and in the Morrell Meeting Room!  You won’t want to miss this author event.

Matt Cost is the highly acclaimed, award-winning author of the Mainely Mystery series, which is set in BRUNSWICK, MAINE. The first book, Mainely Power, was selected as the Maine Humanities Council Read ME fiction book of 2020. This was followed by Mainely Fear and Mainely Money. Mainely Angst is the fourth book of the series.

I Am Cuba: Fidel Castro and the Cuban Revolution was his first traditionally published novel. He had another historical released in August of 2021, Love in a Time of Hate.

Wolfe Trap was the first in the Clay Wolfe Port Essex Trap series. Mind Trap was the second, published in October of 2021, and will be followed by Mouse Trap in April of 2022.

Cost was a history major at Trinity College. He owned a mystery bookstore, a video store, and a gym, before serving a ten-year sentence as a junior high school teacher. In 2014 he was released and began writing. And that’s what he does. He writes histories and mysteries.

Cost now lives in Brunswick, Maine, with his wife, Harper. There are four grown children: Brittany, Pearson, Miranda, and Ryan. A chocolate Lab and a basset hound round out the mix. He now spends his days at the computer, writing.